This notebook is a deep dive into General Linear Models (GLM’s) with a focus on the GLM’s used in insurance risk modeling and pricing (Yan, J. 2010).I have used GLM’s before including: a Logistic Regression for landslide geo-hazards (Postance, 2017), for modeling extreme rainfall and developing catastrophe models (Postance, 2017). The motivation for this post is to develop a deeper knowledge of the assumptions and application of the models and methods used by Insurance Actuaries, and to better understand how these compare to machine learning methods.

The Ohlsson dataset is from a former Swedish insurance company Wasa. The data includes aggregated customer, policy and claims data for 64,548 motorcycle coverages for the period 1994-1998. The data is used extensively in actuarial training and syllabus worldwide Ohlsson, (2010).

All data: low number of claims and frequency (1% freq)

Claims and losses by each variable: 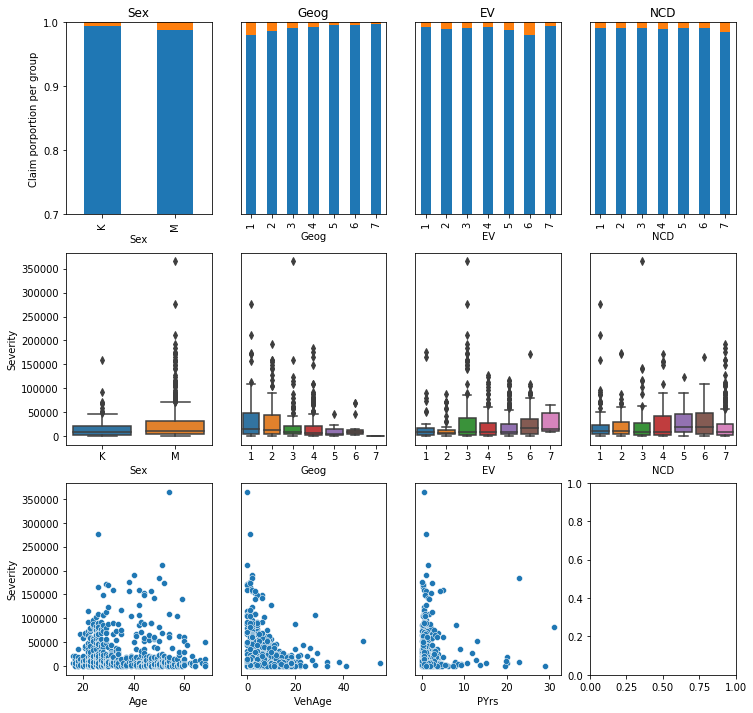 For predicting the occurrence of a single claim (i.e. binary classification) one can use the Binomial distribution (a.k.a Bernoulli trial or coin-toss experiment).

When predicting claim counts or frequency, $Y$, a model that produces Poisson distributed outputs is required. For instance, a Poisson model is suitable for estimating the number of insurance claims per policy per year, or to estimate the number of car crashes per month.

The key components and assumptions of a Poisson distributed process are:

If the mean and variance are unequal the distribution is said to be over-dispersed (var > mean) or under-dispersed (var < mean). Over-dispersion commonly arises in data where there are large number of zero’s (a.k.a zero-inflated).

In the case of zero-inflated data, it is “A sound practice is to estimate both Poisson and negative binomial models.” Cameron, 2013. Also see this practical example for beverage consumption in pdummy_xyhon

In GLM’s, link-functions are applied in order to make the mean outcome (prediction) fit to some linear model of input variables from other distributions. “A natural fit for count variables that follow the Poisson or negative binomial distribution is the log link. The log link exponentiates the linear predictors. It does not log transform the outcome variable.” - Count Models: Understanding the Log Link Function,TAF

Lastly, for any form of count prediction model one can also set an offset or exposure. An offset, if it is known, is applied in order to account for the relative differences in exposure time for of a set of inputs. For example, in insurance claims we might expect to see more claims on an account with 20 years worth of annual policies compared to an account with a single policy year. Offsets account for the relative exposure, surface area, population size, etc and is akin to the relative frequency of occurrence (Claims/years). See these intuitive SO answers here, here, and here.

As suggested in Cameron (2013) we should therefore try both $Poisson$ and $Negative Binomial$ distributions.

For good measure, and to illustrate its relationship, lets also include a $Binomial$ distribution model. The Binomial model with a logit link is equivalent to a binary Logistic Regression model [a,b]. Modeling A binary outcome is not a totally unreasonable approach in this case given that the number of accounts with claims $n>1$ is low (22) and as the $Binomial$ distribution extends to a $Poisson$ when trials $N>20$ is high and $p<0.05$ is low (see wiki, here and here).

However, there is one change we need to make with the Binomial model. That is to alter the way we handle exposure. A few hours of research on the matter led me down the rabbit hole of conflicting ideas in textbooks, papers [i] and debates on CrossValidated [a,b]. In contrast to Poisson and neg binomial there is no way to add a constant term or offset in the binomial formulation (see here). Rather it is appropriate to either: include the exposure as a predictor variable, or to use weights for each observation (see here and the statsmodels guidance on methods for GLM with weights and observed frequencies. I opted for the weighted GLM. The model output of the binomial GLM is the probability of at least 1 claim occurring weighted by the observation time $t=Pyrs$. Note there is no equivalent setting on the predict side, the predictions assume a discrete equivalent time exposure t=1.

In addition it is common in insurance risk models to use a quasi-poisson or zero inflated Poisson (ZIP) model in scenarios with high instances of zero claims. In data science and machine learning we would refer to this as an unbalanced learning problem (see bootstrap, cross validation, SMOTE). The ZIP model combines:

We can derive the model output using predict or the raw coefficients. Sampling the Poisson rate (lambda) illustrates the difference in predicted rates for the intercept and for a when a driver is male. 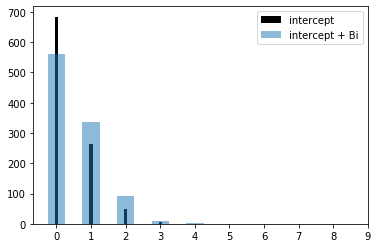 Looking at the model summaries, the histograms and results the of predicted values on the test, we see that each model weights covariates similarly and produces similar scores on the test data. Again note that the $Binomial$ model was only used to demonstrate its similarity in this case, but this may not hold for other data.

Ignore the warning for now we will come back to that.

After fitting a GLM-Gamma, how do we find the Gamma shape (a) and scale (b) parameters of predictions for Xi?

“Regression with the gamma model is going to use input variables Xi and coefficients to make a pre-diction about the mean of yi, but in actuality we are really focused on the scale parameter βi. This is so because we assume that αi is the same for all observations, and so variation from case to case in μi=βiα is due simply to variation in βi.” technical overview of gamma glm

Alternatively you can infer gamma parameters from CI

Below I illustrate the range of predicted severity values for the intercept and each level in Geography.

The GLM-Gamma model gives us a prediction of the average severity of a claim should one occur.

Now, remember the error we got using the inverse-power link function. The warning is fairly self explanatory “the inverse_power link function does not respect the domain of the Gamma family”. Oddly this is a design feature of Statsmodels at the time of writing. Rather it is better to use the log link function to ensure all predicted values are > 0.

Statsmodels uses patsy design matrices behind the scenes. We can apply the design matrix to calculate the distribution parameters for both the frequency and severity models, and for any data set. Train, test, synthetic data and portfolios. You name it.

This is an incredibly powerfull approach as it enables the development of highly parameterised Monte Carlo and risk simulation models.I will walk the steps using pandas dataframes so that it is clear:

We can then use the coefficients to estimate and plot the values and samples of each row, or the entire dataset.

Putting it all together: Frequency-Severity model

Given that this is motor insurance, lets assume a thin margin for %0.05

This summary illustrates the:

Now we can build a Monte Carlo simulation to:

This illustrates the profit and loss scenarios for our pricing strategy across $N$ iterations.

Jupyter notebook here Given a fixed amount of avliable resources, optimise allocation to maximise returns across a set of products with variable returns. Following the Modern Portfolio Theory m...

A guide to clustering large datasets with mixed data-types